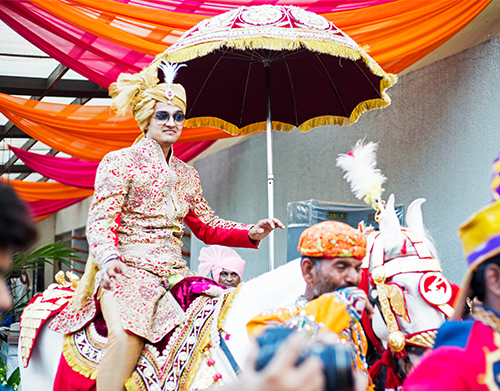 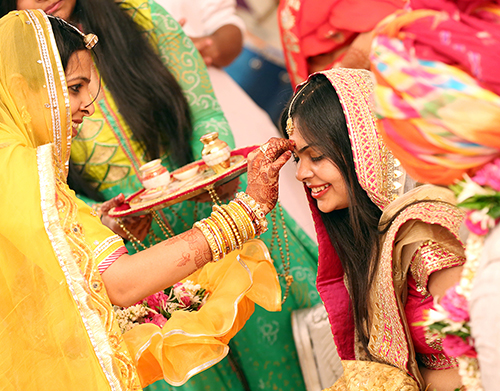 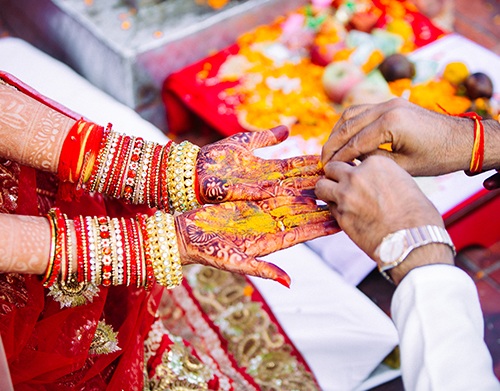 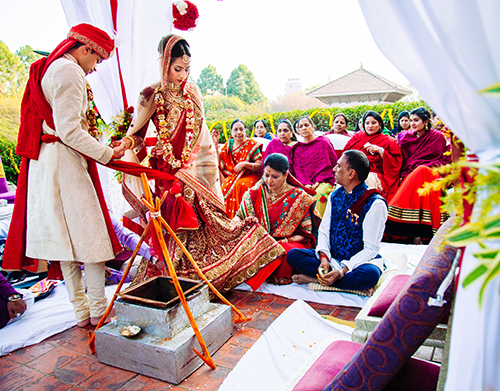 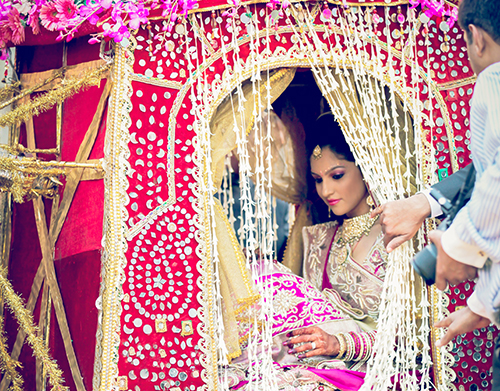 Marwari weddings are elaborate affairs marked by a number of customs and rituals, which may vary depending on circumstances or individual preferences. Here are a few that are de rigueur. The engagement or Sagaai marks the beginning of the long process, where the bride’s father and other male members of the family visit the groom’s family to seal the betrothal. This happens with the bride’s brother applying a tilak on the to-be groom’s forehead. Gifts are bestowed upon the groom, which include clothes and sweets.

The Sagaai is followed by the Ganapati Sthapna and Grih Shanti ceremonies in both the bride and the groom’s houses, where an idol of Lord Ganesha is installed, formally marking the beginning of the wedding. The next important ceremony is the Pithi Dastoor or the more commonly known Haldi ceremony. Here, turmeric and sandalwood paste is applied to both the bride and the groom in their respective houses, by their family members, to the accompaniment of auspicious songs sung by the women singers. The ceremony is observed with greater fervour in the bride’s house, where the bride, attired usually in orange, is taken to a gathering under a canopy, where women apply turmeric and sandalwood paste on her.

In the run-up to the wedding, Mehfils are held, which basically are evenings of entertainment in the bride’s house. Chiefly a women’s affair, here again it’s the bride who enjoys centre stage as the main spectator to entertaining performances such as the ghoomar dance, performed by richly-clad womenfolk of the household.

The Mahira Dastoor ceremony that follows next in both the bride and groom’s respective houses, sees their maternal uncles (together with their wives) ceremoniously arriving with presents for the entire family. The presents include jewellery and clothes. An expensive affair, it is actually aimed at relieving the sister of the enormous expenses that a wedding entails. On the brother’s arrival, the sister extends a warm welcome to him (and his wife), who then distributes the gifts he has brought for the family.

In the groom’s house, in the meanwhile, the Janev ceremony sees him dressed up in saffron like an ascetic, faced with the choice to either run away from the chains of matrimony and become an ascetic or perform a havan and then wear a symbolic thread, which signifies that he has finally made up his mind to get married. After the havan, the groom makes a mock attempt to flee from the daunting prospect of getting married, whereupon it becomes the maternal uncle’s duty to bring him back and convince him to accept matrimony. After the Janev ceremony, a few of the groom’s relatives visit the bride’s house with clothes and jewellery that she is required to wear for the wedding ceremony. This ceremony is called Palla Dastoor.

On the day of the wedding, the groom and his family proceed to the bride’s house in the Nikasi ceremony. Before leaving, members of the groom’s family take turns to get the groom attired. The groom’s jija (his sister’s husband) helps him tie the pagdi or headgear, after which a sehra of flowers or pearls is attached to the pagdi. To ward off evil, the groom’s bhabhi (brother’s wife) applies kohl in his eyes. The baraati follows in which the bedecked groom proceeds to the bride’s house riding a mare with rich trappings.

At the bride’s house, torans (garlands made of flowers, leaves, pearls and other ornamental items) are placed atop the entrance, which the groom has to hit with a neem stick before he can enter the house. This is done to ward off evil. After this, the bride’s mother welcomes the groom, offers an arati to him and applies tilak on his forehead. The groom and the baraatis are now welcomed into the girl’s house.

Upon entering the bride’s house, the bride and the groom proceed to a stage to exchange garlands (made with flowers and often rupee notes strung together) in the Varmala ceremony. Though Marwari weddings are family affairs, this ritual is very important for the couple because it signifies that the man and the woman have accepted each other in their lives. This is also a fun event in that the groom has to bow his head for the bride to garland him. It signifies his complete submission to his bride. No wonder the groom’s friends try and lift him so high that the girl has to try hard to reach for him.

In the Granthi Bandhan ritual that follows, the proverbial nuptial knot is tied, which involves tying one end of the groom’s sash to a corner of the bride’s chunni. The bandhan signifies a formal union of two bodies and minds to form a single entity.

The Paani Grahan comes next wherein the priest asks the bridegroom to take the bride’s right hand in his right hand. Water is poured on the bride’s hand to sanctify and bless the event, which signifies that the bridegroom has now accepted her as his wife. It implies that hereon he has to be with her in good times and bad. During months of courtship, the to-be-weds often promise to keep each other happy, but repeating the same promise now before everyone gives it a totally different meaning.

Next up is the Saat Pheras or circumambulation of the holy fire—the central and most important wedding rite. According to some, three of the seven pheras happen outside the mandap, at the entrance—that is when the bride and groom come face to face and exchange varmalas (garlands)—and the remaining four pheras are performed on the mandap. The girl leads in two of the pheras, while in the other two, she follows the boy. With the groom in lead, it signifies he that will protect his wife for the rest of their lives, while the bride leading means she will face death before him.

The next ceremony is Ashwarnarohan, wherein the bride is asked to put her foot on a grinding stone. Just like with the pheras, this ritual means that the newly-weds will face every challenge with courage. But a point of difference here is that the bride’s family makes a contribution to their happiness: this ritual is where the brother of the bride puts puffed rice in her hand, which she passes to the groom’s hand and which is then offered to the sacred fire. This ritual is symbolic of a brother’s happiness that his sister is getting married to a suitable man. He wishes her sister and her husband prosperity. The groom then applies vermilion on the bride’s forehead near the parting of her hair. This signifies that they are finally married. While the bride sits on the right side of the groom in the preceding rituals, during Sindoor Daan she sits on his left side. This is symbolic since the heart is on the left side of the body. The woman sitting on the left side of her man signifies her being close to his heart.

After the Sindoor Daan, the bride and groom walk seven steps together to signify that from this day on they have resolved to walk no more as separate individuals but as one body and mind. With every step the duo makes a promise or resolution as regards their journey ahead as a couple.

Bride is welcomed by new family

In the Aanjhala Bharaai ritual that takes place just before the bride and bridegroom leave the mandap, the bride is welcomed to her new family by her father-in-law who places a bagful of money on her lap. This is symbolic of her being not just accepted as a new member of the house by him, but also entrusted with new responsibilities, including managing the household and spending money judiciously. The bride has to distribute the money among her sisters-in-law and her husband, after which the couple gets up to touch the feet of the elders, who in turn bless them. Paharavani, a fun-filled ceremony, follows, in which the groom is taken aside by the womenfolk of the bride’s family and made to recite poems. He is made to sit on an asana and gifted clothes and money by the bride’s family.

Before leaving her paternal home, the bride worships the threshold of her house. The couple is then escorted by family members to the car, which is waiting to take her to her new house. Usually, a coconut is placed under the car’s wheel. The bride lifts her veil and the bridegroom then gifts a new piece of jewellery to his newly-wedded wife, after which the couple leave for his place. The bride bidding farewell to her paternal family or the Bidaai is always an emotional moment. The bride weeps since she is leaving the house she grew up in and entering an unknown world. The pangs of separation are overwhelming and difficult for her parents and relatives to handle. The happy communion almost always ends up with moist eyes for the bride’s family.

The responsibilities of making a home are many and often trying. Nevertheless, the bride embarks upon her new journey with the conviction that there will be sunshine after rain and there will be laughter after pain.