Jagannath Taparia had built his family hometown in Jaswantgarh, Rajasthan, in 1879. The extended family meets every few years in their hometown to renew old relations and to forge new connections. MARWAR speaks to the Taparias to know more about the family get-together that was held last year, their family history and the secret behind their unity.

It was in 1879 that Jagannath Taparia established the hometown of the Taparias in Jaswantgarh, Rajasthan. His four sons grew up to establish trade and philanthropic initiatives in this small town, after which they migrated to Calcutta (now Kolkata) and Bombay (now Mumbai). 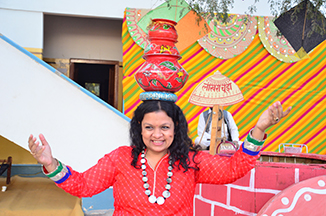 Business ventures
Laduram Taparia, son of Jagannath Taparia, later started the first business venture in 1900 with a small investment. His brothers joined in and the four branches of the family started different entrepreneurial ventures, which grew to become a business conglomerate having interests in areas such as plastics, pharmaceuticals, magnets, hand tools and marble. The Taparias soon achieved a leadership position in most of their business ventures. The businesses of the four branches now include companies such as Supreme Industries, Supreme Petrochemicals, Famy Care Ltd, Taparia Tools, Permanent Magnets Ltd, Alliance Marbles and Pregna International, which collectively achieved a turnover in excess of R8,000 crore in 2015 and had a market capitalisation of over R15,000 crore. The Taparia family was recently in news when their pharmaceutical business, Famy Care Ltd, was acquired by the US multinational company Mylan Inc for over R5,000 crore.

Philanthropic contributions
The Taparias have been involved in various charitable activities in Jaswantgarh. For more than 75 years, their Ayurvedic and homeopathic centres have helped the townsfolk by providing free consultations and medicines. The Taparia family has also built a number of schools and an Industrial Training Institute (ITI). In accordance with Prime Minister Narendra Modi’s ‘Swachh Bharat’ campaign, the family has recently built several public lavatories in this small town of Rajasthan.

Upholding values
Apart from exemplary entrepreneurism and philanthropy, what makes the Taparias unique is the way they have remained strong as a family for generations. “While we have had business separations in the family, I don’t remember them ever seeping into our personal relationships. We have kept our business and personal lives separate. Almost all conflicts, both financial and personal, have been resolved by family elders,” says Mahavirprasad Taparia, 78, the managing director of Supreme Industries.
Every member of the extended family agrees that the women have played a huge role in keeping the family together. From leading the joint families to managing relationships, they have not only kept the extended family together but also strengthened bonds. Ranidevi Taparia, 75, who has been married for 60 years, says, “There is a lot of strength in staying together. The women of the family love and respect each other.” To achieve this, they do not discriminate between their own children and other kids of the family. This creates unity, which is passed on from one generation to the next. Pushpa Taparia, 63, who has been married for 44 years, says she has learnt family values from her mother-in-law and grandmother-in-law. “I have imbibed the values of love, sacrifice and patience from them,” she says. Aruna Taparia, now 44 and married for 26 years, chimes in, “Our family loves our daughters-in-law as much as our daughters.”
According to Jyotiprasad Taparia, the chairman of Famy Care Ltd, the sanskars or values of his forefathers have kept the family united. Jaiprakash Taparia, 68, concurs: “We meet during Diwali and the annual Jaswantgarh get-togethers, and that keeps the family united.” Further, the immense respect each member has for the elders helps maintain peace. “Once a decision is made by an older member, we simply follow it,” Pramod Taparia, 66, explains. The older generation, which includes Bajrangalal Taparia, Harnarayan Taparia and Hiralal Taparia, believes that the family has remained united for so long because of their forefathers’ blessings and their good deeds. 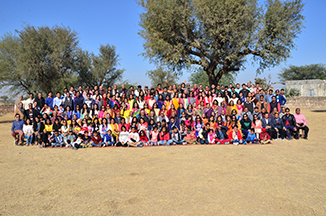 Taparia Yuva Jaswantgarh Meet
The four-day Taparia Yuva Jaswantgarh Meet was held in 2015, where more than 200 family members across five generations met to renew bonds and meet new additions to the family. The theme of the event was ‘We Are One’, for which a special logo was created. “The logo had four colours, depicting each of dadaji’s four families (sons of Jagannath Taparia),” Siddharth Taparia says.
Many family members had to travel across cities and even countries to attend the event. “The TYJM was initiated in 1987 with the intention of keeping the family connected to our hometown,” says Harish Taparia, who had come from Vietnam. Vijayji Taparia, 60, one of the older attending members, feels the event helps create a special bond across generations. Pramod Taparia, who was a part of the organising committee of the 1987 meet, feels the new generation of organisers have done a splendid job to keep everyone engaged and entertained. 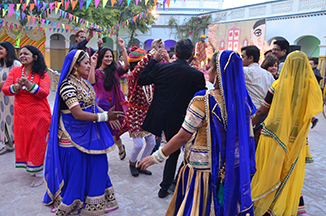 Entertaining events
The Taparia Premier League, a cricket tournament, was one of the most popular events at the meet. “We had an auction for players. Six teams of twelve players each competed over two days,” inform Sharad and Ashutosh Taparia. To promote health and wellness, the Taparia Marathon was held. “It was amazing to see family members ranging from 8 to 70 take part,” says Bharat Taparia, 42.
Anuraag Taparia, who had travelled from Chennai, says, “The highlight was a procession with 200 family members returning to the village in bullock, horse and camel carts, accompanied by a music band.” The Taparia Business League was also a big hit, say Bharat and Mukul Taparia, where seven teams of 15 members each played a game whose objective was to maximise profits by planning, strategising and executing the process of procuring and assembling hand tool kits within a stipulated time.
The older members felt that the younger ones should get acquainted with Rajasthani traditions, and so Aruna and Pooja Taparia helped organise ‘Taparia ki Dhaani’, where traditional games were played. While potters and bangle makers were busy in one corner, a Rajasthani folk group kept everyone entertained. Anirudh and Vivek Taparia, who participated in the Taparia Olympics, spoke about how men, women and children took part in various fun games such as sack race, lemon spoon race and tug of war. In ‘Jaswantgarh ki Rasoi’, teams had to cook and were judged on creativity, innovation and taste. Sanjeev Taparia, an organising member, says, “Me and my team left Jaswantgarh with a sense of satisfaction after the successful meet.”

A successful meet
Anju Toshniwal (a daughter of the family residing in Delhi) attended the event and returned with memories to last a lifetime. “I felt like a young girl again, happy and reckless,” she laughs. Rachna Rathi (another daughter) who had come from Pune, and Sandeep Loyalka (a son-in-law of the family from Mumbai) were equally upbeat. Anupama Bihani (a niece) said, “It was so much fun sharing fun-filled and exciting moments together.”
Yaashvi, 16, Aryaman, 12, and Vivaan, 6, were some of the youngest members at the meet. They participated in various events together with other children and were introduced to family members they had never met before. “We should all stay together in Jaswantgarh!” summed up little Vivaan.