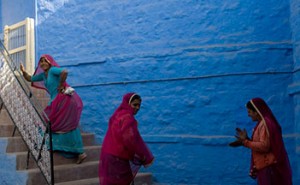 Jodhpur, in Rajasthan, has earned the sobriquet ‘Blue City’ from Brahmapuri, a small and ancient settlement of Brahmins within the city. Brahmapuri is distinguished by its electric blue and azure structures, which are distinctly visible from the majestic Mehrangarh Fort. Sugato Mukherjee wanders through labyrinths to capture stunning glimpses of this ‘azure city’. MARWAR presents a selection of the photographer’s works. 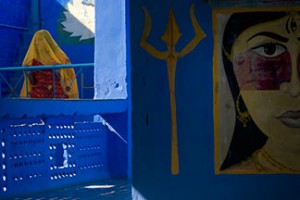 Jodhpur, the second largest city of Rajasthan, lies on the eastern fringes of the Thar Desert. It was founded in 1459 by Rao Jodha, a Rajput chieftain, who had annexed the surrounding territory to form what is now known as Marwar. Built around the same time, presiding majestically on a hillock above the desert town of Jodhpur, sits the sprawling Mehrangarh Fort—an invincible fortress that even the Mughals could not penetrate. 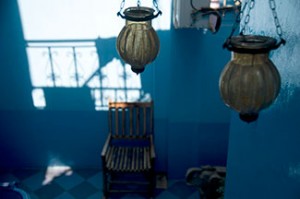 From the ramparts of this red sandstone citadel, the maze of blue that expands to the border of the desert looks glorious. This is Jodhpur, or Brahmapuri as it was once called, because of the large number of Brahmins who lived in a settlement at the foot of the majestic fort. Brahmapuri is distinguishable by its electric blue and azure structures, due to which Jodhpur has earned the sobriquet ‘Blue City’. Indigo, a natural dye, added to whitewash, has been an environment-friendly way of maintaining the blue tint of the walls for centuries. 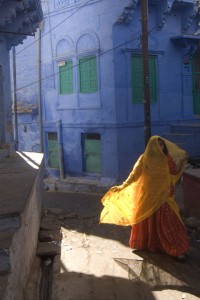 Inside Brahmapuri, the ubiquitous blueness seems to be a symbol of human resilience against the parched, sandy-brown Thar Desert that surrounds the town. The shades change subtly through the day, from a deep, intense indigo to a fading hue of blue that almost looks fragile.

About the photographer
Sugato Mukherjee is an award-winning photographer and has contributed to The Globe and Mail, Al Jazeera, National Geographic Traveller, Harper Collins, Yale University Journal and many other publications. His coffee-table book An Antique Land : A Visual Memoir of Ladakh (with a foreword from National Award winning filmmaker Goutam Ghose) was published in 2013. Mukherjee’s work on the sulphur miners of East Java has been awarded by UNESCO. Currently, he is working on a long-term project on Kashmir.