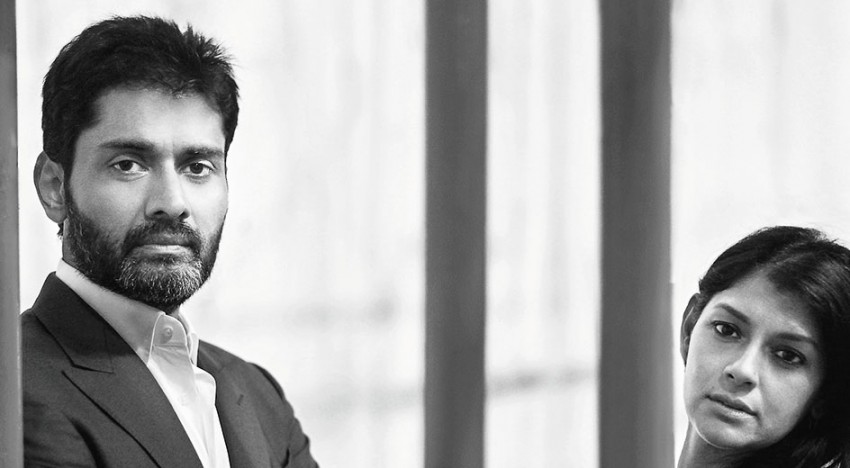 “Theatre is a convention—the relationship between the actors and a live audience that helps us understand real life. Theatre reflects real life. Cinema, however, represents something entirely different. It is a photograph of life; a sort of imitation; the possibility to create something that gives us the impression of real life.” I am raptly listening to the 48-year-old Subodh Maskara talk, who together with wife and actor-director Nandita Das has founded Chhoti Production Company Pvt Ltd, a film and theatre venture launched with a view to tell compelling stories through diverse mediums.

Maskara has not only worked behind the scenes at Chhoti Productions but has also made his acting debut on the stage in 2012, in Chhoti’s debut production, Between the Lines. The contemporary play, which earned rave reviews, is set in urban India and offers a glimpse into the relationship between lawyers Maya (Das) and Shekhar (Maskara) who have been married for 10 years. The plot revolves around their relationship, which is thrown out of gear when both are pitted against each other on a criminal case. Courtroom arguments find their way back into the bedroom. Shekhar cannot deal with the idea of his wife opposing him and this results in the blurring of their personal and professional lives.

Maskara, who admits that the play mirrors his own marital life in certain ways, shares, “I was brought up in a traditional Marwari family—an arena of patriarchal authority. Nandita is her own woman and is an accomplished actor, director and social activist. In an Indian marriage, it is usually seen that a woman ends up making sacrifices for her husband and family. Nandita and I entered into this marriage with our own values and outlooks. What was important for us was to maintain a balance in our duties as partners, especially after our son, Vihaan, was born in 2010.” Between the Lines was released on October 6, 2012, at the National Centre for the Performing Arts (NCPA), Mumbai, and has since garnered critical acclaim not only across India but the world over.

From business to theatre

I ask him about his foray into the theatre industry, and he says, “Post my marriage to Nandita in 2010, we would invite our friends over for a get-together every year, shortly after New Year. At one such gathering, Nandita introduced me to acclaimed playwright Mahesh Dattani. When Mahesh said that he was casting for his upcoming play, Nandita very casually suggested that he should try me out for a role.” Maskara had taken a sabbatical from his business that year, and even though the casting had been done, Dattani rang for him a couple of days later. And that is how Maskara found himself auditioning and being cast in a play spearheaded by Dattani. “Unfortunately, within a month, the play was shelved,” says Maskara.

Fortuitously, around the same time, Das mentioned that she had a story in mind, reveals Maskara. She was pregnant at that time. Since scriptwriting is a difficult and time-consuming process, she invited theatre actress and friend Divya Jagdale to co-author the play—which turned out to be the origination of Between the Lines. “Vihaan was born in the same year, and Nandita would juggle between her motherly duties and writing the play,” says Maskara. Finally the script was ready. Das had decided that this should mark her debut as a director of theatrical productions, but the question remained as to who would produce the play. Das had made her foray into direction in Bollywood in 2008 with Firaaq, a political thriller based on the infamous Godhra riots of 2002. But unhappy with the production company, she had decided never to collaborate again with a producer she was unfamiliar with. “So we thought ‘Why not set up a production company that will help her make both films and plays?’” Thus, Chhoti Productions was born,which combined both their areas of expertise: Das’ creative streak and Maskara’s business sense and experiencein the corporate world.
From stage to screen
According to Maskara, while theatre seeks to entertain, inform and enlighten, what was needed in India was an attempt to progressively dismantle the barriers between stage and screen and the constraints of geography, economics, language and accessibility. So CinePlay—a new genre of cinema that transmutes theatrical productions into cinematic experiences—was born in 2014, under the Chhoti Productions’ umbrella. According to Maskara, CinePlay is a blend of cinema and theatre and has the simple objective of making theatre accessible through cinematic techniques. Thus, what it does is capture live performances of iconic plays on film and screen them for audiences across the globe in cinema halls, or stream them on their website. After filming Between the Lines (which took a total of four days), CinePlay went on to add acclaimed plays to its repertoire over the next few months, including Dattani’s Dance Like a Man, Mohan Rakesh’s Adhe Adhure and Siddharth Kumar’s The Job. But accomplishing all this wasn’t easy. “There were people who criticised us saying, ‘This is neither cinema nor theatre!’” recalls Maskara. “They thought that we were trying to compete with live theatre. But I felt that many people would want to watch theatre after watching a CinePlay; and I was right!”

A cinematic adaptation of Between the Lines was screened at the prestigious Museum of the Moving Image (MOMI), New York, on October 25, 2014. The next screening was scheduled on November 1, at Yale Working Women’s Network in Yale University, where Das had been selected for the prestigious World Fellow Programme. CinePlay also partnered with India’s premier airline operator, Jet Airways, in December to screen cineplays for passengers. This year, Between the Lines opened to a packed house at the Dubai Community Theatre & Arts Centre (DUCTAC), in Mall of the Emirates, between February 20 and 21.

A background in business
Maskara’s foray into theatre is not something he could have foreseen. “I made my way into the world of business at the age of 18, when I started helping out my father, Santosh Maskara, who had then been representing the South Korean electronics company, Samsung, in India,” says Maskara. “I would attend college in the mornings [he has a master’s degree in commerce] and then spend a couple of hours in his office, trying to learn the tricks of the trade.”

Later, his father founded an enterprise by the name of Maskara Polytex Pvt Ltd to manufacture polyester yarn, and a young Maskara found himself getting involved there too. “Soon after, I immersed myself into the business,” he says. “While I was involved in dealings with Samsung, I was also handling multi-million-dollar contracts with the Oil and Natural Gas Corporation (ONGC) and other big companies.” Having tasted success in his very first project, he utilised the revenue to secure admission for an MBA from the Kellogg School of Management, Northwestern University in Illinois. He graduated two years later and came back to India in 1994.

Upon his return, his father felt that he had received enough training and knowledge and that he was now ready to make it on his own. Subodh obliged, and in 1997, established Polygenta Technologies Limited (PTL) in Nasik, to manufacture high-quality, sustainable polyester filament yarn by recycling post-consumer PET (polyethylene terephthalate) bottles. But unfortunately, the company had to be shut down in 2000, as the business was no longer viable. “Perhaps the basic concept of recycling plastics to make polyester yarn was ahead of its time,” reflects Maskara, who then shifted his focus to manufacturing television sets—a decision that earned the company an annual turnover of `150 crore. The revenue earned allowed him to reinvest again in the polyester business in 2007-8.

Next on the agenda
“My decision to give up full-time corporate life coincided with the birth of our son Vihaan. I felt that my first-born—a daughter from my previous marriage—and my son required my attention more,” says Maskara with a smile. And indeed, it is obvious that it is the role of a doting father that Maskara loves the most.

So what’s next on the agenda? “As for new developments on the career front, I am always waiting to try something new and exciting,” he says with a smile. We surmise he is talking about an opportunity that will again take him into a completely different direction.