Even after a fulfilling meal comprising a refreshing soup, a delectable appetizer and a hearty entrée, only the dessert has the power to  give it a sweet ending that truly appeases the mind, body and soul.  No matter how lip-smacking the savory dishes are, the final impression is often left with the finesse of the sweet dish. Even if you are full after tucking in all that your favourite dining outlet has to offer, “there’s always room for dessert” you murmur and gladly succumb to the sweet temptations.

While Indian cuisine offers an exhaustive list of sugary delights, there’s something about daintily crafted desserts that emerge as favourites. Going beyond picture-perfect offerings,  we asked luxe restaurants around the country to tell us about their signature labours of love from the desserts section and this is what we learnt. 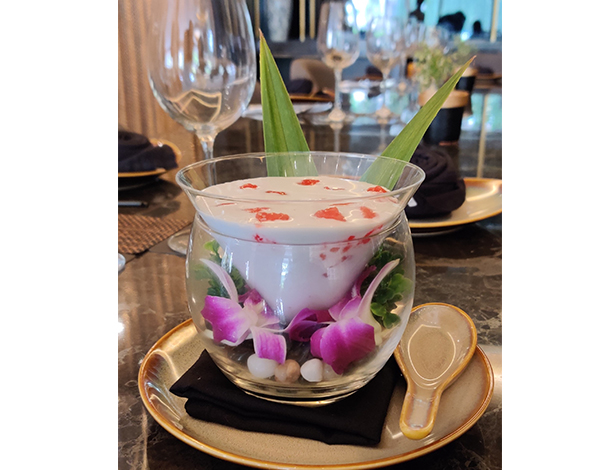 For Altamsh Patel, the executive chef at The Park, Mumbai, the top offering from his repertoire of sweet delights is Thai Thim Krob, which is made from Thai sweet coconut cream, chestnuts and pandan leaves. 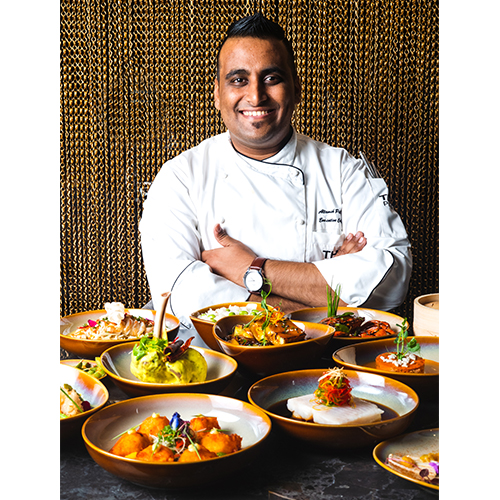 “I have had Thai Thim Krob worldwide, especially in Thailand; it is one of my favourite desserts. I felt this is something which everyone would like back in Mumbai—even I personally like to make it—so we have added this special dessert in Meishi’s menu,” says Chef Patel.

To master the vegan dessert, Patel resorted to learning it from an authentic Thai chef, who also mentioned how the elements were sustainable and could be created with local ingredients. And it has been a crowd-puller since.

Nostalgia at 1911, The Imperial, Delhi 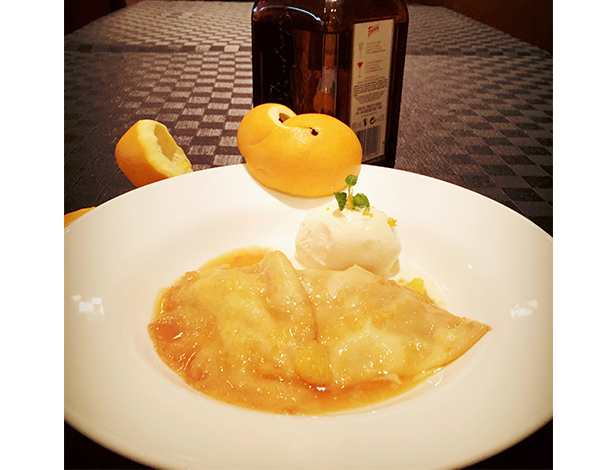 At Nostalgia, The Imperial, Delhi, Executive Chef Prem K Pogakula highly recommends Crepe Suzette to all his guests. Asked about his personal techniques, he says “I personally lean towards simple recipes, as I think that the simplest of recipes can work as the best sometimes, though it largely depends on how you decide to garnish it”. 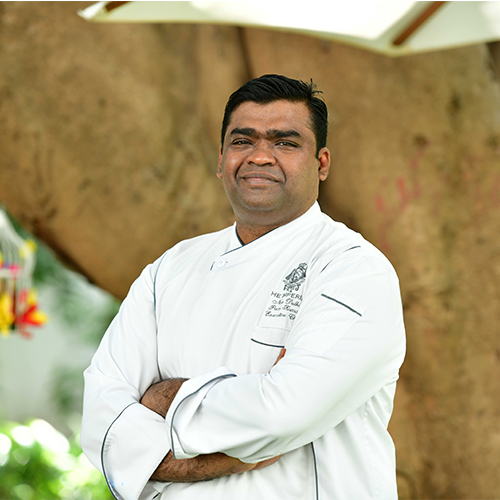 True to the restaurant’s name, the dish arouses nostalgia and holds a special place in the hearts of dessert lovers for its simplicity and after-flavors. The recipe is an European classic that has travelled the world and delighted diners with different modifications. “However, at The Imperial, we have retained the essence of the original recipe and the concept of flambéing, which is serving live, à la minute and directly from the pan,” explains Chef Pogakula.

Crepe Suzette is not only a tantalising experience for those with a sweet tooth, but also is a feast for the eyes. “We usually prepare thin sweet crêpes in the kitchen, while everything else is done live in front of the guest. Caramelising the sugar,  making sauce with butter, orange juice and rind, and most importantly, stewing crepes in the sauce and flambéing with orange flavor liquor—it all happens in real time,” concludes Chef Pogakula. 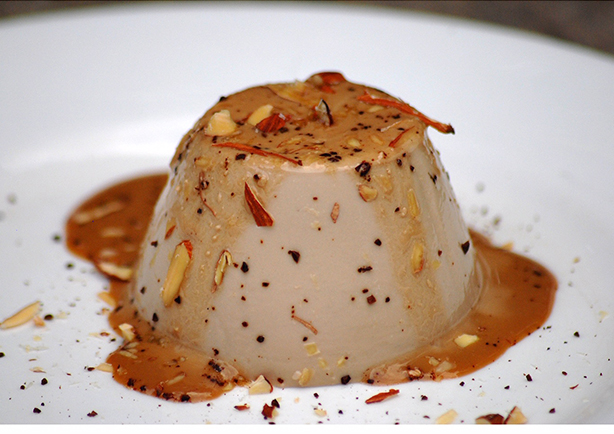 One of the champions and industry favourites is the humble panna cotta, which originates from Italy. Though the technique is modest, the panna cotta is difficult to master. “A must-have dessert on our menu is the Espresso Panna Cotta with coffee, jaggery and caramel, topped with slivered almonds” says Chef Ishan Sengupta from the Grasshopper, Bengaluru. 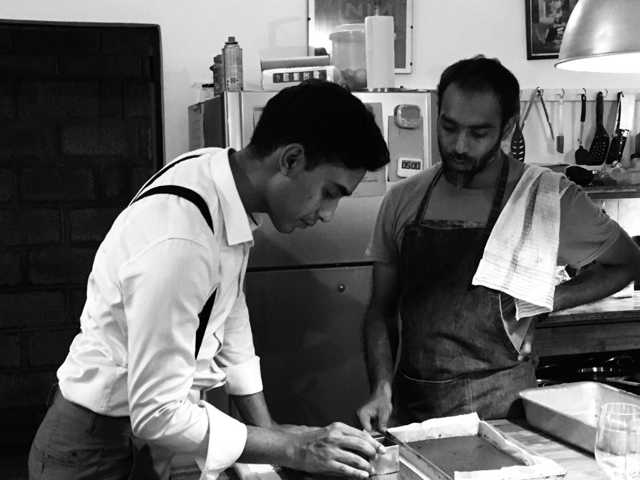 When asked about their idea behind the creation, he adds “We have always had a delicious panna cotta on our menu, and we felt this season the espresso panna cotta would work best. They are simple desserts, but it’s hard to get the consistency just right. We worked towards getting the perfect ‘wobble’ on our panna cotta, and then worked out which accompaniments would go best to complete the dessert. The coffee caramel with jaggery came out a winner, with roasted almonds providing the needed crunch.”

A gastronomic retreat for Asian cuisines, Yauatcha’s new collection is heaven for dessert lovers. “One of our most loved desserts is the Golden Nugget from the Manish Malhotra x Yauatcha collection,” says Chef Ganesh Bodake.

The collection is a royal amalgamation of dessert with design. Describing the theme, Chef Bodake says, “I wanted to create something that resonates with the luxurious look of Manish Malhotra’s outfits. Each dessert is inspired by the iconic designer’s celebrated outfits from his couture collection, Maahrumysha. The ivory velvet finish of the dessert mimics the textures and colours of his outfits. I decided to also add a touch of gold to the praline on top, to resemble the sequins on the dress.” 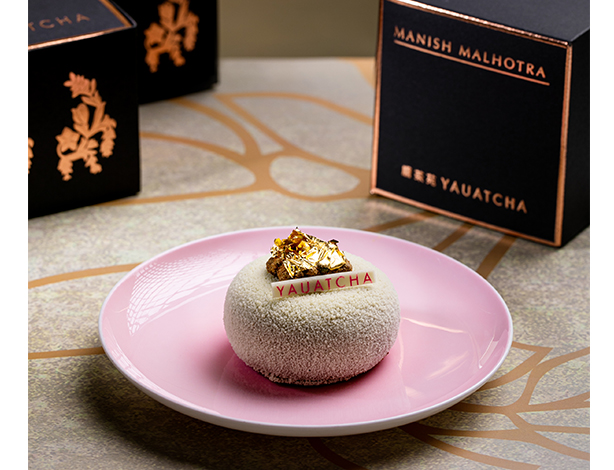 The petit gâteau unveils in layers and presents a play of multiple chocolate textures. Asked about the intricacies of the creation, Chef Bodake says, “You’ll find a dark chocolate brownie that is dense and a molten chocolate liquid centre that makes the dessert moist and gooey. On top comes a rich creamy dark chocolate mousse and then comes the crunchy cocoa crumble on top”.

In conclusion, a dessert then adds more than just a perfect ending, leaving one with sweet memories and a craving for more.