Using variety, taste and convenience for customers as keywords, new-age ‘foodprenuers’ are elevating the food industry to new heights with every passing year. From ‘essential’ to ‘piece de resistance’ gourmet businesses, owners are not sparing a moment to go the extra mile to turn their products and fine dining into exceptional experiences. MARWAR has a chat with Rashmi Daga, Tanvi Chowdhri and duo Adhiraj Thirani and Akshat Singhania, to learn how they are breaking barriers with their unique ventures.
Gone are the days when going to the nearest restaurant to break the monotony of eating the same food everyday was an ultimate joy in itself. With global fast food chains and the FMCG sector expanding their food-prints, the awareness and demand for variety is reaching a fever pitch. This automatically gives food companies the push and competitive spirit to innovate and create not just variety, but also a holistic eating experience to woo customers. And when talking about revolutionising, how can Marwaris—the early adopters and masters of the art of doing business—not make headlines? 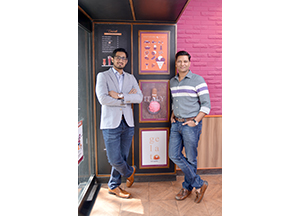 Mama Mia! gelato
— Adhiraj Thirani & Akshat Singhania
Mama Mia! Yes, that’s exactly what you’d say if you were relishing a gelato at the famous gelateria in Kolkata—Mama Mia! gelato. Started in 2005, Mama Mia was taken over from former owner Natasha Aggarwal in 2014 by Adhiraj Thirani and Akshat Singhania. Mama Mia! serves gelato (what ice cream is known as in Italy) and sorbets. These are made fresh with ingredients sourced from around the world. What sets the brand apart from regular ice-cream parlours is the strong selection of flavours and quality-ensured recipes. “We use the best ingredients for our products. Our signature coffee flavour is made with coffee from Colombia, South America.” Thirani says. “We also have special gelatos for the sugar sensitive or the diet conscious. Our ‘zero sugar’ range is very popular and has a big fan base. We have a range of gelato cakes and gelato creations where we manipulate the gelato and serve it in different forms such as thick shakes, sundaes and fizzes,”
Thirani has a Bachelors of Business Administration degree with an Honours in Marketing from the University of Kent, United Kingdom, and was a part of the Entrepreneurship Development Program of MIT and the Venture Capital Development Program at the Indian School of Business, Hyderabad. Singhania is a BSc (Hons) Biotechnology from the University of Hertfordshire, United Kingdom. Though they both come from very different business families, they share a similar passion for food, which translates into their unique offerings. But like any food business, they have also had their share of hiccups. “To make an average ice cream is fairly easy, but to prepare a good ice cream (that too repeatedly) is difficult. Managing scale and operating multiple outlets across multiple formats can be a challenge. The food business requires people who can multitask effectively. You have to be a chef, a server, accountant, an entrepreneur, a marketing person, a food photographer, a stylist and an interior designer all at once—at least initially,” Singhania shares. 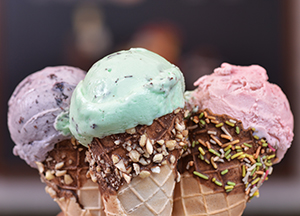 In addition to spoiling customers for choice, the duo is also changing the age-old perception of ice cream. Rather than being a dessert consumed at the end of a meal with limited options, the gelato can make for a delightful eating experience anytime. “Traditionally ice cream is seen as a post-dinner dessert option. However, with low-fat varieties on offer, we consider it a snacking item,” Thirani says.
The duo also believes in educating and engaging with their customers through workshops. “We like to share our skills and give customers a chance to manipulate gelatos and serve them to guests in a manner they choose. We have held dessert and basic Italian cooking workshops, which were well-attended and worked as excellent platforms for the brand to engage with customers,” Singhania says.
With 13 stores in Kolkata and four in NCR (two in Delhi and two in UP), plans are afoot for further expansion. “Our products will soon be available off store shelves in a prepackaged format, which will be a first; and we are expecting to go pan-India, soon. Additionally, we have a franchise strategy focused on Tier II cities and plan to take our company into the FMCG sector,” Thirani says. 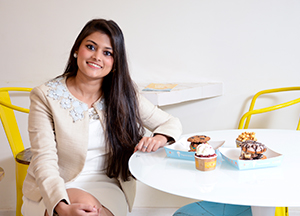 Papacream
— Tanvi Chowdhri
We have all tasted various forms of ice creams and frozen yogurts, but have you ever heard of ice cream being served as a full three-course meal? Welcome to Papacream—a one-of-a-kind ice cream store in Mumbai that makes a meal out of ice cream. Here, you can have ice cream as breakfast, as an entrée and as a dessert, prepared right in front of you using liquid nitrogen. “We do both sweet and savoury ice creams. Our breakfast ice creams include the cereal crunch ice cream (made with cereal seeped milk, which tastes like milk left in your bowl after your cereal is over) and the Horlicks ice cream with Nutella pancakes. Our savoury ice creams include the Pani Puri Sorbet and the Mexicano,” says Tanvi Chowdhri, founder of Papacream.
Before starting her gourmet business, Chowdhri held a finance-related job in New York, which was after she completed her engineering course from Carnegie Mellon University, USA. Talking about the transition, she says, “Food has always been my passion. Having travelled to different parts of the world while growing up, I was exposed to global cuisines and developed a penchant for them, which only grew over the years. Fortunately, while I was in NYC, I had the opportunity to explore the kitchens of my favorite chefs. It was then that the idea of creating a unique culinary experience in India dawned upon me and I knew it was time to move back to live my entrepreneurial dream.” 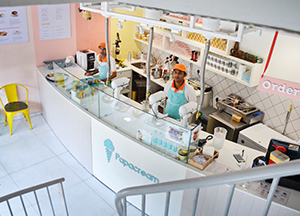 Chowdhri feels her technical background and financial expertise came handy while putting in place the automated nitrogen dispensing system and managing finances. Just four months into operation, Chowdhri already believes in providing an all-inclusive experience to customers through Papacream and its well-thought out recipes, where right from store décor to presentation of the food items, creativity is the central theme that brings everything together. Chowdhri says that every single ice cream has a theme and concept behind it, with inspiration ranging from street food to Michelin-level restaurant food. “The first step is ideation. Then, we decide on different flavour profiles and combinations, have multiple rounds of trials for each flavour profile and finally work on the presentation,” she explains. Among the favourites are Jumbo Doughwich, Cookiewich, Pani Puri Sorbet and Thai Sushi.
Although Chowdhri may be enjoying a good response from ice cream lovers, she too has had to face challenges. At times she had to give out free tasting samples to people to break the notion that ice creams cannot be savouries. A supportive family is what keeps her inspired and helps her when the going gets tough. “Seeing my dad set up his own business and burn the midnight oil in the initial days of his entrepreneurship has motivated me. Moreover, being married into an extremely supportive family with an encouraging husband and father-in-law propel me to work hard and bring my brand at par with their successful ventures,” she says. Talking about her future plans, Chowdhri says she wants her brand to have a global presence. “I still have a long way to go, but I’m on the right track,” she says with a smile.