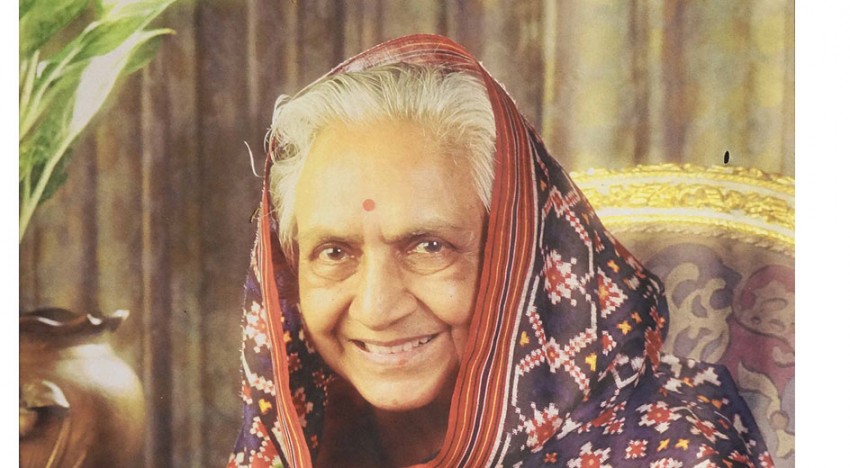 Dr Sarala Birla, wife of renowned industrialist Basant Kumar Birla, passed away at her residence in New Delhi, Mangalam House, on March 28, 2015. She was 91. Her body was flown to Kolkata the next day and cremated in the presence of family members and friends. Dr Sarala Birla is survived by her husband, Basant Kumar Birla, who is 94 now, and two daughters, Manjushree Khaitan and Jayashree Mohta.

We present a moving tribute that Rajashree Birla, devoted daughter-in-law of late Dr Sarala Birla and wife of late Aditya Vikram Birla, paid to her mother-in-law that brings out the extraordinary life and many contributions of the indefatigable matriarch that made her the unforgettable icon she was.

In homage to Pujya Ma,
When I think of Pujya Ma, I think of her as an evolved, iconic guru, spiritual to the core. Ma was truly a karmayogini, who always thought beyond herself. A vivacious person, an educationist, Ma, the compassionate elder of the Birla family, was the very exemplar of all that is best in mankind. Her rock solid values, her unconditional giving, her luminosity and her charm drew thousands to her.

She possessed an unswerving self-belief. Her propensity to experiment and to cut loose from fears emanated from her mental toughness. She had a special tenacity to be extremely focussed.

Perseverance, was one of her other great qualities. Quietly, Pujya Ma became a major force, not only in the lives of all of us in the Birla household—the family—but everyone who came in touch with her.

There was something very divine about Pujya Ma—something very religious and spiritual. She had immense faith in God. Pujya Ma and Kakoji (my father-in-law) have performed more than 14 yagnyas. Swami Chinmayanandji, Swami Akhandanandji, Swami Tejomayanandji, Swami Satyamitranandji, among others, have given extensive discourses at Birla Park, on Pujya Ma’s invitation. She, of course, listened with rapt attention, absorbing the nuances of spirituality. And this too, has a resonance with her life.

Through spiritualism, she channelised her energies in the right direction. Life and the opportunity to reach out to thousands of people, through her benevolence, through her act of giving and caring, she viewed as the greatest blessing, next only to the Birla family.

Imagine Ma and Kakoji’s pilgrimage to the shrines of Kedarnathji and Badrinathji, extended 18 times, notwithstanding the steep and tough climb. This is awesome, more so when people have struggled to make it even once in their lifetime.

There is yet another narrative that I want to share about Pujya Ma. There was a time just a few years ago, when Ma would get up much before the break of dawn—around 2:30 AM—and do her japas and pujas. Subsequently, she would go into the kitchen and roll out a hundred rotis, which would be given to the poor queuing outside Birla Park. Pujya Ma was incredibly energetic.

There are other sides of her prismatic personality. A great educationist and a patron of the arts and culture, she has made an indelible imprint in these domains. Working closely with Pujya Kakoji, together they set-up 45 educational institutions.

As a patron of the arts and culture, the Sangit Kala Mandir and the Birla Academy in Kolkata, spawned by Pujya Ma and Kakoji—the way these have risen to be among the foremost performing arts and art centres, are a testament to her engagement. That the Sangit Kala Kendra has found a place in the ‘Limca Book of Records’ is a matter of great pride for all of us in the Birla family. In gratitude, the Sangit Kala Kendra honoured them—for their unbeatable feat of fostering art and culture for over six decades.

Let me also allude to the many beautiful temples built along with dharmashalas and kalyan mandapams to bring succour to the seeker, rest for the weary and deep joy to couples getting married and their families. This too is a major contribution to society. At the personal level, one of the greatest blessings that God has bestowed upon me is to have given me parents-in-law like Pujya Ma and Pujya Kakoji—the best in the universe. Being with them has been a transformative experience for me.

Pujya Ma’s was an extraordinary life—a life of purity, compassion and service. She touched our souls. Her legacy of values and her spirit will live on with us forever.