Home People Marwar & I Art Is Where the Heart Is 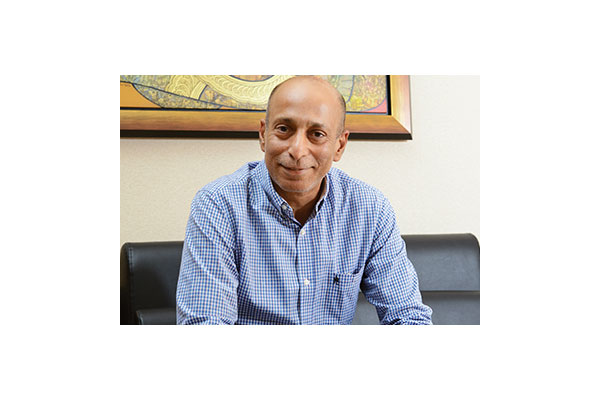 My earliest recollections of my Marwari roots come from stories my paternal grandfather, the late Ramniwas Ruia, narrated to me as a child about the family and its roots in Shekhavati and of his father, the late Ramnarain Ruia, who is the founder of the Ruia business empire. 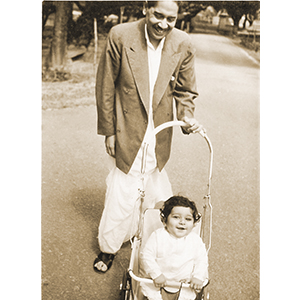 My earliest memories are of my conversations with my grandfather, the late Ramniwas Ruia, that gave me the impression of a community that believed in frugality, risk-taking, philanthropy and conservation of resources. Although Ramniwasji himself dressed in double-breasted suits tailored at Savile Row—a prince among men that he was—and was driven around in a Cadillac to attend board meetings, be they at Bank of India, where he was Vice Chairman for a number of years, prior to the nationalisation of the banking industry, or to the Royal Western India Turf Club (RWITC), where he was Chairman of the Board of Stewards for eleven consecutive years. Bhaiji, as he was popularly known among his friends, was a large-hearted man, the entrepreneur among his brothers, each of who had his respective area of specialisation and was assigned his rightful role in the family’s businesses.

Grandfather recounted stories about how as a child they would go to Ramgarh on camel-back and bullock carts, escorted by armed guards, as the train went as far as Churu and unaccompanied travel thereafter wasn’t safe. One of my most vivid recollections is an anecdote of how money was transferred via a dacoit chief in Sikar—which was to be handed over in Ramgarh—to meet the expenses for the last rites of his grandfather, the late Harnandrai Ruia. It was the ingenious “angaria” system that then worked in major parts of Rajputana and the Central Provinces.

My mother too came from an illustrious family based in Hyderabad and Mumbai, the Pitties, who at one time farmed the revenue of the province of Berar, in lieu of the monies they had loaned to the Nizam’s Government. Her father, the late Balkrishnalal Pittie, was another major influence in my life. Practical and liberal, he was a man of his word who played a pivotal role in helping me recognise my talents and encouraged me to follow my passions, rather than follow the beaten path. His death in 1994, while I was in New York, came as a major blow, more so because it came at a time when I could have used all his practical knowledge and wise counsel to my advantage. His command over the workings of the sugar industry was legendary, and his understanding of the stock markets used to leave me completely dumbfounded. My grandmother, who was his shadow (grandfather had practically lost his sight and she became his constant companion) is the gentlest and most doting of persons. A pillar of strength to him, she was supportive to the hilt and would read books and balance sheets to him through the night. She could run her fingers down six columns of figures to give the total before the calculator could—a talent that a lot of Marwaris have. 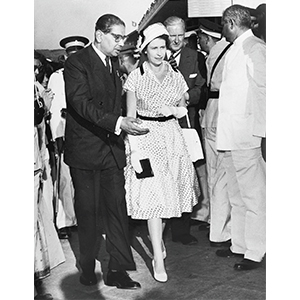 In 1976, I toured Rajasthan for the first time. I spent a month travelling across Jaipur, Jodhpur, Bundi, Kotah, Jaisalmer and Udaipur, visiting industrial units and sites of historical interest. While on our way from Tonk to Kotah, our car broke down late at night in a small town called Lakheri which had a cement plant belonging to the ACC group. Our guide, one Mr Vyas, knocked at a door around midnight to see if he could get help. The door was opened by an inebriated transport contractor of ACC, who promptly proceeded to call the manager of the cement plant and arrange for food and lodging for the night for two unknown teenagers whose car had broken down. My lasting impression of the episode was that of a semi rural community that was helpful and accommodating even at the cost of hardship to themselves. The next day found us make a late start, but we were well fed and were off on the road to Kotah with a car that had been fixed overnight. Indeed, the gentleman was the quintessence of the age-old tenet ‘Atithi devo bhava’ or ‘The guest is divine’.

Life as an entrepreneur 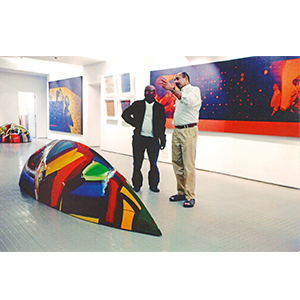 The next few years found me straitjacketed in the role of a student and trainee in the family businesses of manufacturing yarn, paints and automotive castings, which gave me a much needed grounding in industrial practices and business ethics that the family practiced. But it restricted my creative juices.

Opportunity, however, came knocking on the door, thanks to my close contact with Martand Singh and Pupul Jaykar and their work with the ‘Festivals of India’ that were held as part of international relations all over the world. Breaking away from the family business machinery in 1988, I set up my own export house, Vignesh Impex, that used indigenous crafts to create products that could be used in a Western context: Candle stands, Christmas gifts, wooden furniture, glass decorations, picture frames and the like. International trade fairs became the order of the day as I moved from one trade fair to another, procuring orders and processing and exporting innovative products. Life was on the fast lane and revolved around seven production centres and visiting buyers from major importers and departmental stores around the world. Those were heady times. But the mind remained restless.

It was the quest for production centres for my export business that first took me to Ramgarh, our ancestral town. When I first entered the town through the Churu gate, it felt like entering a magical, sacred space. All the stories that I had heard from grandfather seemed to come alive. Painted havelis, narrow paths, high jharokhas (small balconies through which women could view the proceedings on the streets, without being seen), a street bazaar where the entire community met, transacting, greeting, meeting and fulfilling their simple needs. The riot of colours was amazing. Luckily, the family haveli was largely kept the same way as it must have been during the days of my ancestors. One was able to view the adornments that they had collected in situ. Although at that time the mind was preoccupied with different types of local craft, I returned to work with the collages that I first saw adorning the walls two decades later.

In 1998, I made an attempt to set up a furniture manufacturing factory with Italian collaboration that exposed me to a new way of risk-taking, financial negotiations and providing employment to a hundred strong workforce. It left me in knots with my creativity bogged by labour and financial mores, administrative functions and meetings with hard-nosed buyers. I realised that this wasn’t for me. The creative juices weren’t flowing and the mind was unfulfilled. I realised how important the need for creativity was in one’s life. 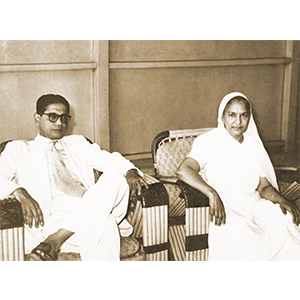 This time around, the fine art market beckoned, and in 2003 I set up the Bombay Art Gallery to promote young talent. It was the first gallery to recognise the talent of Himmat Shah, an artist I hold in great esteem and one whose terracotta works have still not been given their due. Another landmark show organised by Bombay Art Gallery was a group show that focused on the works of Nasreen Mohammadi, Zarina Hashmi and Mehli Gobai. Showcasing an entire sketch book of Amrita Sher-Gill in collaboration with Mortimer Chatterjee and Tara Lal of Chatterjee & Lal was a pleasure too. The catalogue has become a collector’s volume. Mehli Gobai again exhibited his paper works from the 1980s (done in New York). This show was a runaway success. Talented abstractionists such as Pandit Khairnar and Yashwant Deshmukh were some of the other artists that the gallery promoted.

The need to understand Indic classical traditions, art and culture had started at a young age in me, along with traditional educational pursuits. While classmates would be on the field playing basketball or football in the large grounds behind Campion School (in Mumbai), I would be preoccupied with reading history or poring over books by C. Sivaramurti and Karl Khandalavala and volumes published by Lalit Kala Akademi, so generously given to me by a granduncle. Otherwise, I would be trying to understand the nuances of miniature painting, or the styles adopted by sculptors spanning a period of two thousand years. Sundays would be spent at the homes of collectors and mentors, rather than with friends or at movie theatres. 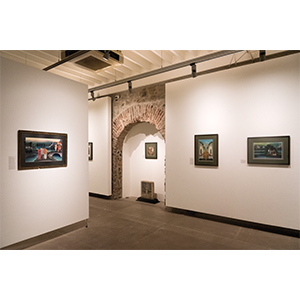 This preoccupation with the arts led to a curiosity to understand the source of all Indic art and thought. Consequently, I started reading the major Upanishads and other religious texts such as Vivekchudamani by Adi Shankaracharaya, the Bhagwat Purana, the Gita, the Mahabharata and the Yoga Sūtras of Patañjali, along with writings by spiritualists such as Paramahansa Yogananda, Shri Ramkrishna, Swami Rama Tirtha, Shri Ramana Maharshi and the pragmatic teachings of Nisargdutta Maharaj, Shaiva-siddhanta and its interpretation by Swami Lakshmanjoo. The Dalai Lama too featured in these meanderings. Indic thought, be it Hindu, Jain or Buddhist, have fed off each other to form the corpus of Eastern thought which the world is just about beginning to understand.

Pursuing a PhD in the art of Nathadwara has become my latest preoccupation, along with providing advice to art collectors. Taking a cue from the finds in Shekhavati that I have mentioned earlier, I had the opportunity of researching and presenting a show ‘Cut-PasteD’, in 2013, that spoke of early nationalism and how it was couched in a language of sacred icons, encouraging a national consciousness. More recently, collages featuring historical events that led to the final years of Independence (also from Shekhavati) were exhibited at Chatterjee & Lal to wide acclaim and was featured in Domus, a magazine that caters to serious thought in the field of architecture and art.

Rajasthan, a land of art and a unique culture, has always figured in my world, through its craft, its miniature paintings and visual culture, bringing out my Indic consciousness and a love for my roots.