Home People Profile AN ARTIST AND HER WHIMSY ART 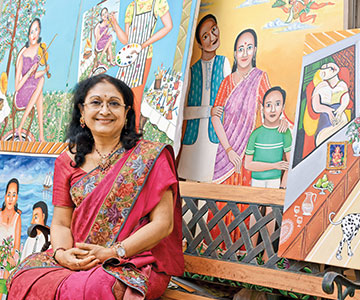 Brilliant colourist, Nayanaa Kanodia may be considered the pioneer of L’Art Naif in India, a genre until then largely unseen and unheard of in a contemporary context. An Economics Honours graduate and an entirely self-taught artist, except for a year’s apprenticeship with celebrated artist Anjolie Ela Menon, she has established a niche for herself in her chosen field. Having taken French leave from formal training, it enabled her to infuse patterns of strong individualism in her work, long before it was considered a redefining approach for unique and contemporary artists of today. This guided Nayanaa Kanodia to avoid the hierarchy of labels by the art world such as ‘highbrow’ or ‘lowbrow’ and present the dynamics of social reality in concrete frames of virtuality.

From discipline to framed wonder

“I come from an army background, my father having been a brigadier in the army,” says Nayanaa Kanodia. “During my childhood, with each of my father’s transfers, we shifted to a new city. And this was more often than we could predict! I was, therefore, exposed to many cultures, which went on to influence my life later. I consider myself lucky to have parents who were so broadminded! I was taught to respect all faiths, religions and, more importantly, other people’s viewpoints. Most people found this attitude shocking because half a century back, conservative thinking was the order of the day. I had a very aristocratic and bourgeois upbringing, because both my parents came from extremely cultured and wealthy families.”

Kanodia’s family is from Kanod, Rajasthan, (now Mahendragarh). Life at home was disciplined, which she extended to her academic world as well, having always been a brilliant and obedient student. Punctuality was of paramount importance and so were dutifulness and ethics, and these show amply in her creations. Understandably then, she paints such happy scenes and morally strong canvases. “What I feel is, it is very important to look at things, analyse them and then apply creativity to bring out your artistic signature,” she says. 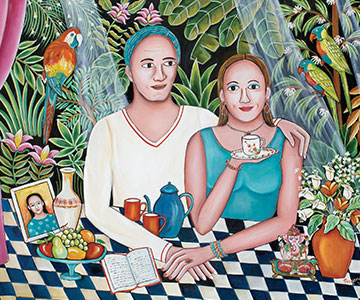 Kanodia’s list of achievements is impressive. In 1998, she was chosen (from all Commonwealth countries) by The Commonwealth Institute for a solo exhibition to inaugurate their newly renovated complex in London. Looking at the contribution she has made to the world of L’Art Naïve, she was invited by Victoria and Albert Museum, London in 2001 to demonstrate her painting techniques and exhibit her paintings in their gallery. She is the first Indian whose paintings feature in the collection of Paintings in Hospitals, UK, which was earlier listed as a museum. Her works are permanently displayed at Musee International D’Naif Art in Paris. Impressed by the social messages that her paintings convey, a consortium of schools in Los Altos, USA, has been using her works as a medium of instruction to its students. Her paintings feature in a recently published book by Reinhard Fuchs titled Women in Art. They also feature in several Indian contemporary art auctions internationally and find place in public and private collections all over the world. Collectors take pride in her paintings, a case in point being famous author Erica Jong, who has recently acquired her work. So much for her works! As for the lady herself, she has conducted art camps in India and abroad; she has a teaching experience of two decades and is on the faculty of Spic Macay International; she gives talks and presentations at prestigious organisations and universities; she has been a judge at many art events, art fairs and art competitions; and has attended numerous art camps in India, Bangkok, Cambodia, London, Moscow, St Petersburg, Italy, Greece and Sweden. Also, she has been awarded by Megh Mandal Sansthan, Ministry of Culture, Government of India.

Nayanaa Kanodia loves to dedicate most of her time to her work. You can find her in the studio every morning without fail! She paints until the late afternoon and then spends the evenings with the laptop, which in today’s world has become a necessity. “One has to juggle around and juxtapose work and leisure, many times sacrificing the latter,” she says. “However, I would like to add that I feel extremely relaxed and rejuvenated when I paint, no matter how physically and mentally exhausting the exercise actually is. My fingers itch the day I do not paint. I feel that I have missed out on something and a kind of creativity vacuum sets in. Being a wife, mother, grandmother and artist can be a daunting task, as one has to juxtapose all these roles with great dexterity, pleasing and keeping everyone happy—like an acrobat balancing himself on a tightrope. But at the end of the day, my happiness lies in my family’s happiness.” Kanodia is not only dutiful towards her art, but also believes that it is her duty as a human being to help the less privileged. “One feels so rewarded to see a smile on their faces,”she says, referring to her beneficiaries. Kanodia curates the art shows of the Indian Cancer Society (the oldest cancer society in India) on their Annual Founder’s Day. She is also closely associated with several NGOs like Concern India, Khushi, People for Animals, Wildlife SOS, CPAA and Nargis Dutt Foundation.

For the last three years, Kanodia has been concentrating on creating masterpieces for the show, The Quintessential Woman- A Celebration. Asked about her favourite creations, she points to a list that includes The Great Indian Bazaar, Ramu Bootpolishwalla, Husain’s Horses, The Last Supper, Manipulation Corporation, The Early Birds, Sunday Outing, Partners for Life, Female Power and Spoilt for Choice. 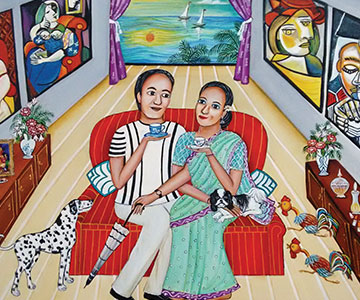 “The Masters inspire me, as there is so much to learn and take inspiration from. One has to teach a child the alphabet and only then can they develop their own handwriting. Similarly, artists cannot develop their own style and carve a niche for themselves unless their basics are very strong,” explains Kanodia talking about her artistic inspiration.

Coming to the themes of her works, she adds, “The various themes for my paintings draw from a vast repertoire such as horses, buildings, colonial hangover and the legacy of the British Raj, roadside vendors, ancient sports, weddings, vehicles—in short, lifestyles of the past and present. Instead of depicting tragic scenes, I love presenting a snapshot of life through my art that is preposterous to the maximum, exuberant and bursting with energy, idiosyncrasy and absurdity. I reflect on the charming idiosyncrasies of my subjects with a fine degree of wit and gentle satire.”

Kanodia’s paintings present flat, bright polished surfaces, vibrant and dynamic colours and intricate details and patterns on canvas. She focuses on current social issues that India is witnessing such as conservation of the environment, women’s empowerment, etc.

Kanodia signs off with words of advice for budding artists: “There are no short cuts to success. Apart from your talent, you have to work hard to achieve artistic excellence. You have to hone your skills. An artist should never say that he or she has reached the pinnacle, because that will be the end of all creativity