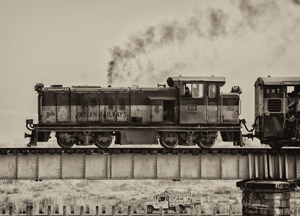 The Dholpur Light Railway was commissioned in 1906 by Maharaja Rana of Dholpur to transport red sandstone from Chambal to Delhi. Parth Jha boards the train that runs on a narrow gauge before it is developed into a broad gauge section. MARWAR presents a selection of the photographer’s works from the ride that may soon become a part of India’s railway history. 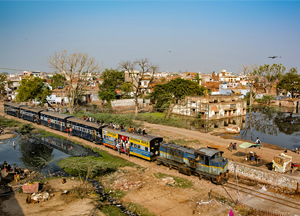 A news report on the ongoing gauge conversion of the Dholpur-Bari-Mohari-Tantpur/Sirmuttra narrow gauge section (or the Dholpur Light Railway) convinced me to plan a trip to the red sandstone city of Dholpur and to document this historically significant section before it is transformed for ever. The credit for this railway’s existence goes to the presence of red sandstone in the Dholpur region. The stone was used to build the Agra Fort, the Red Fort, the Taj Mahal, Humayun’s Tomb, the Parliament House, and most recently—the front porch of my own house. 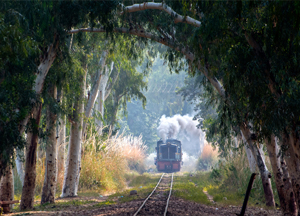 The Dholpur Light Railway was commissioned in 1906 by the Maharaja Rana of Dholpur. It was primarily built to transport red sandstone from the mines located in the interiors of the Chambal ravines to Delhi. The construction was completed in 1916, which makes the railway line a century old. Locals, for generations, have waited at Dholpur station to board the first service of the Dholpur-Sirmuttra passenger train every morning. Having seen the glorious days of steam, only a single train, hauled by a 30-year-old diesel engine, runs on the network. 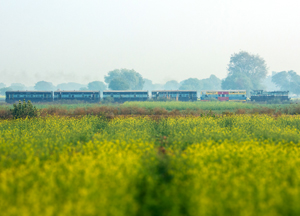 My motive was to photograph this network and capture the train passing through various viaducts, villages and farms. Fortunately, it was winter, and three very important elements for the photographs—fog, soft light and blooming mustard fields—were present. For me personally, it was like time travel. Narrow gauge sections of the railway have become very rare in India. In some cases, the stations have no structure at all—a single tree is sometimes more than enough to mark the spot. The Dholpur section is one of the last remaining narrow gauge networks in India, and complements the idyllic life here.
While trucks are now used to transport the red sandstone, the train remains the best form of conveyance for locals, as the fare for the longest route is R15. The train crosses the vast dry ravines of Chambal and the sharbati wheat belt of Madhya Pradesh to halt at Bari, which is a fairly big town that serves as a junction. The train then passes through numerous viaducts across the Parvati River, dense eucalyptus forests and mustard fields to reach Sirmuttra and the stone mines of Tantpur.

During my trip, an old village woman mistook me for a railway employee and asked when the badi line (the broad gauge) would start operating. Although I could sense her excitement for better connectivity and frequent trains, I felt nostalgic—after all the change would mean the end of the one and only narrow gauge network in Rajasthan. After the completion of the ongoing broad gauge conversion, this historic marvel will hold mention only in travel reports of the already scarce railway enthusiasts and may eventually be lost in time.