Home People A Prince & A Gentleman

Lakshyaraj Singh Mewar understands the adage ‘With great power comes great responsibility’ all too well. The only son of Shriji Arvind Singh Mewar, the 76th Custodian of the House of Mewar, he is the executive director of the HRH Group of Hotels that was established by his father. The family-owned group is reputed for perpetuating the rich legacy of Mewar that dates back to the eighth century and is India’s only chain of heritage palace-hotels and resorts under private ownership. Over the years, the group has sensitively restored and converted many of the palaces and sanctuary-resorts once owned by Lakshyaraj’s grandfather and Mewar patriarch, Maharana Bhagwat Singh Mewar, who was the 75th custodian in an unbroken chain of maharanas dating back to 734 AD, including iconic figures like Rana Kumbha, Rana Sangha and Rana Pratap. The group has also been at the forefront of making more than just a slice of Rajasthan’s history accessible to the public through the royal family of Mewar’s self-funded museums. 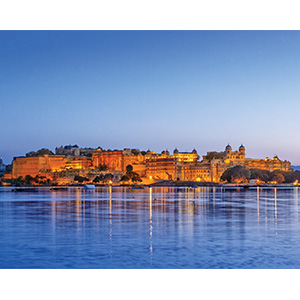 The true essence of luxury is portrayed through the lens of heritage, rareness and excellence, and the 33-year-old scion is no stranger to this lexicon of luxury. Every one of the group’s hotels maintains its original character, ensuring that guests truly ‘Experience the Original in the Abode of the Kings’. For example, at Jagmandir Island Palace, the group’s heritage hotel situated on an island in the serene Lake Pichola, the customer is literally the king. Built in the 16th and 17th centuries by the Sisodia Rajputs of the kingdom of Mewar, the erstwhile palace is steeped in history. It also is the epitome of luxury in its most authentic form and is truly unique. “The uniqueness is derived from the grand architecture, spacious courtyards and lawns and luxurious suites with rare paintings, crystal chandeliers and objets d’art,” says Lakshyaraj Singh. “In the 17th century Jagmandir Island Palace, today we are sensitively and effectively catering to the 21st century audience. It is a major challenge for us to maintain and keep alive its original character though,” he adds. 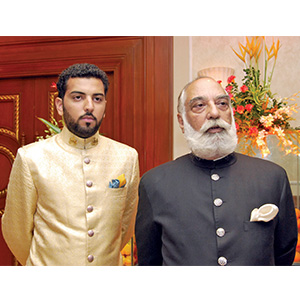 As the third generation of hoteliers in his family, Lakshyaraj was entrusted with the responsibility of breathing new life into Jagmandir Island Palace in 2007. He had just returned to India after graduating from the Blue Mountains International Hotel Management School in Australia. Thus, he assumed the position of general manager at the Jagmandir Island Palace, elevating the image of the heritage hotel through 2008-09, thanks to his learnings in Australia. “Hospitality does come naturally to people from India. At Blue Mountains, I honed my hospitality skills with the best-in-class teachers and deans,” says Lakshyaraj, who went on to intern at Four Seasons and at a fine dining restaurant in Australia, working under some of the finest chefs and restaurant owners, before returning to India. 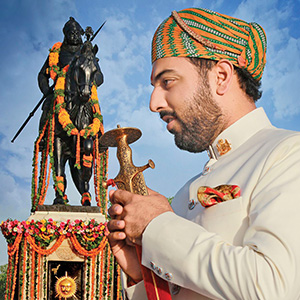 Even after all these years, Australia still has a special place in his heart, and his ties with the country are as strong as ever. On a trip to Australia earlier this year, he was ecstatic to know that he was to be nominated as the Victorian Business Ambassador to boost trade ties between India and Victoria.

The business of luxury 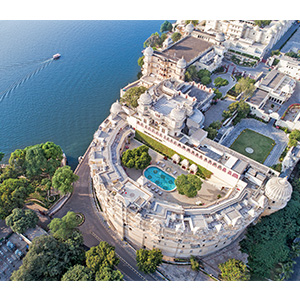 Besides Jagmandir Island Palace, Lakshyaraj oversees other heritage hotels of the group, like Shiv Niwas Palace and Fateh Prakash Palace. Classified under the Grand Heritage Palace category, both are located in Udaipur and are recipients of the National Tourism Award in ‘Heritage Grand’ category. The Fateh Prakash Palace is home to one of the world’s largest private collections of crystal under a single roof, housing an incredible collection of crystal ware, ranging from decanters and glasses to washing bowls and even furniture—each customised for the House of Mewar and bearing a delicately etched crest of Mewar. A visit to Jagriti, the heritage exhibition at Jagmandir Island Palace, is just as insightful. Even the group’s Royal Retreats like Shikarbadi Hotel in Udaipur, Karni Bhawan Palace in Bikaner, Gorbandh Palace in Jaisalmer, Fateh Bagh in Ranakpur and The Aodhi in Kumbhalgarh offer the curious traveller a glimpse into the lives of erstwhile Mewar royalty. “At HRH Group, we have always been committed to ‘marketing the destination’, rather than merely marketing the palace-hotels, however unique these may be,” says the hotelier, who was honoured with the ‘Young Hotelier of the Year 2018’ award, in addition to earning other entrepreneurial accolades over the years.

Then, there’s the City Palace Museum. Located at the City Palace complex, it is a repository of rare paintings, murals, photographs and armaments, intended at preserving the cultural heritage and the time honoured traditions of the people of Mewar. “The regal experiences in Udaipur are richly diverse. Our guests absorb the living heritage of Mewar as they enjoy their holidays with us. When guests are staying at Shiv Niwas Palace or Fateh Prakash Palace, they know that they have a world-class museum adjoining it,” he explains.

Life inside the palace walls 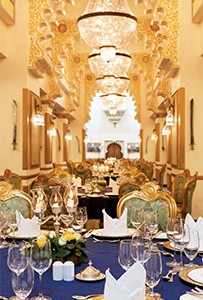 Before leaving India to pursue further studies in Australia, his life had always been firmly rooted in Udaipur. It was on these very grounds of the sprawling City Palace complex that Lakshyaraj spent all of his childhood. “Life and growing up in the City Palace has been a dream! I live in our ancestral home beside a lake that is surrounded by hills; and our private residence is Shambhu Niwas,” he says, adding that his office is located near the Tripolya, or the famous gateways (pols) into the City Palace. Like his father and grandfather, he has studied at the prestigious Mayo College in Ajmer. “It is a family tradition and I was immensely proud to uphold it. Mayo College was a tremendous learning experience. My love for cricket and sports in general grew and flourished there. And I made friendships which have stood the test of time,” he says, reminiscing about his days at his alma mater.

His childhood, he admits, was just like any other child’s. “My parents—Shriji Arvind Singh Mewar and Vijayraj Kumari Mewar—have been strict disciplinarians without being overbearing. My dear mother instilled in us the belief that we have to be a part of the world we live in yet have the sensibility to remain apart. There has been enormous amount of freedom to do what one likes, to travel and develop one’s passions,” says Lakshyaraj. Today, he remains devoted to bringing up his daughter, Mohlakshika, together with his wife, Nivritti Kumari Mewar, who is “a professional in her own right”. “Yes, bringing up a child is a great responsibility and we feel blessed to have so much love and support,” he says, explaining that both sets of grandparents dote on their daughter as well. 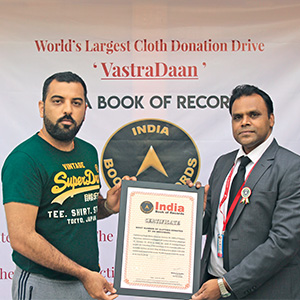 Philanthropy is a way of life in the Mewar family ethos, and in January this year, Lakshyaraj flagged off a pan-India clothes donation drive called Vastra Daan. It involved collecting 3,01,500 clothes for recycle donation and giving them away to the underprivileged from across the world. It was lauded as a pioneering initiative. “We live philanthropy every day, not just indulge in it for a few days,” he says. 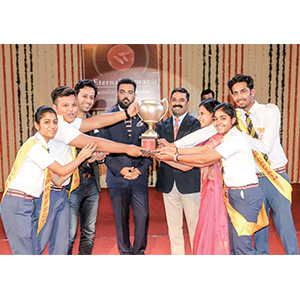 At present, Lakshyaraj is also engaged as a trustee of the Maharana of Mewar Charitable Foundation (MMCF), established by his late grandfather in 1969 to ensure the continuity of the House of Mewar. And under Eternal Mewar, a project that encompasses non-profit and philanthropic undertakings of the Mewars, he has been involved in various developmental projects and confesses that the growth of the Maharana Mewar Public School and the Maharana Pratap Smarak Smriti, an organisation that aims to instill a sense of pride and confidence in people, remain closest to his heart. 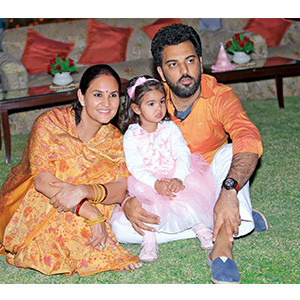 “Leisure time is with friends and I have a very small circle of friends. I relax with them, sharing laughter and food.” Also, music is more than just a passion for him, Ustad Nusrat Fateh Ali Khan’s qawwalis being a favourite. “Ustad Nusrat Fateh Ali Khan is the ultimate singer and performer! Every qawwali of the Ustad is sublime and unique. I have built up an entire collection of his qawwalis which I treasure. My ring-tone is also from the Ustad’s qawwali! I only wish I had heard him live.” 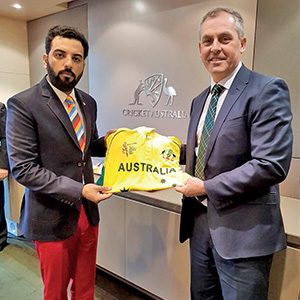 Cricket is another passion, the seeds of which were sown during his Mayo days, even nurturing a desire to play for the state and the country. “I learnt the value of teamwork and the importance of leadership through cricket. While I’ve given up competitive cricket now, I’m actively involved with the Rajasthan Cricket Association, mentoring young teams and promising players from our state and district. It is yet another huge responsibility to shoulder. But I love it!” concludes the House of Mewar’s promising scion.