Home People A Passion for Innovation 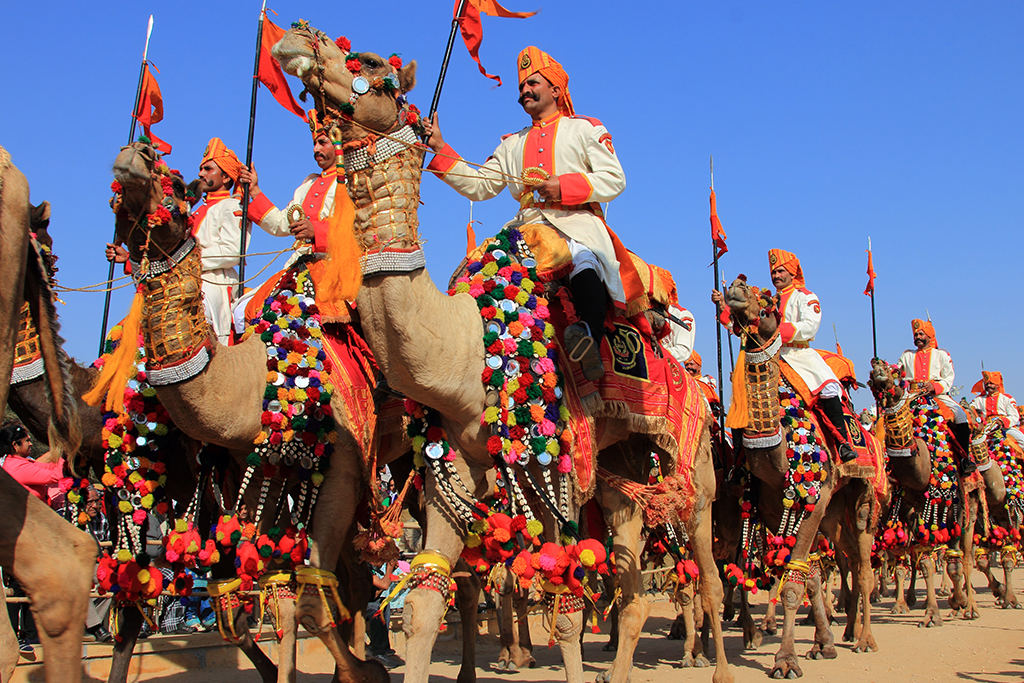 Imagine a world in which your genetic make-up can be decoded to give you personalised guidelines or recommendations on how to become healthier. Imagine your physician using the same genetic information to determine your customised treatment plan when you are sick. That world is not many years into the future; it is already here due to the advances in technology and genetics that have made it possible to study genetic variants at specific locations in the DNA that can affect health and well-being.

The pioneer of this technology—called personal genomics—in India is Mapmygenome India. For the uninitiated, genomics is the study of genomes (the complete set of genes present in an organism). Summarising the company’s offerings, Founder and CEO, Anu Acharya says, “With a simple swab of saliva, we can give you a complete profile of your genetic predisposition, health and lifestyle. While the genetic component does not change, factors like environment, habits and lifestyle can be modified to mitigate any genetic risk. Our counsellors explain the genetic report to you, correlate this information with your health history and make a preventive action plan that works for you.”

Physicians today are increasingly using genomics to confirm a diagnosis, screen for health issues and analyse inherited health patterns. According to Acharya, this is because our health, habits, physiology and psyche have a strong hereditary component, whose information is coded in our genes, or DNA, that forms the building block of our cells. She adds, “Genomics is the technology to analyse our DNA and use this information for various purposes—to understand our ancestry, to learn more about factors that affect our health and to build a healthy future. Thus, it connects our past, present and future, giving us our true janampatri [horoscope]. At Mapmygenome India, we call this Genomepatri™.”

Genomepatri™ is Mapmygenome’s most comprehensive offering, which predicts genetic risk for 100+ diseases, traits, drug responses, inherited conditions and carrier status. Since its inception in 2013, the company has processed tens of thousands of samples through Genomepatri™, and the vision, Acharya states, is to touch 100 million lives and save a million lives by 2030. 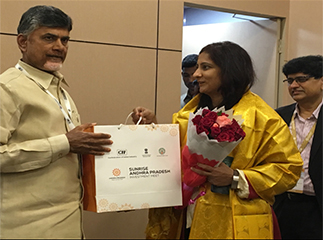 Anu Acharya being felicitated by N Chandrababu Naidu, the then chief minister of Andhra Pradesh, at CII Partnership Summit 2017 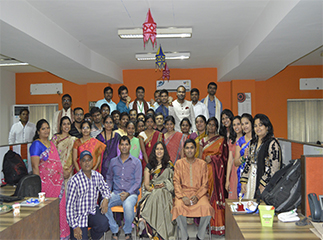 A love for physics
At the core of Mapmygenome lies Acharya’s passion for science and an appetite for innovation—things that she says she has inherited from her father. Although born in Bikaner, Rajasthan, Acharya grew up in Kharagpur, West Bengal as her father was a professor of physics at IIT Kharagpur. One among four siblings, Acharya reveals that all of them were given immense freedom and encouragement to pursue their passions by their father. She especially recalls the support extended by her father when, after completing her MSc in physics from IIT Kharagpur in 1995 and subsequently earning postgraduate degrees in physics and Management Information Systems (MIS) from the University of Illinois, she decided to pursue entrepreneurship. She says, “Right from my schooldays, I had aspired to become a physicist like my father and win the Nobel Prize in physics. However, I did some soul-searching in the second year of my studies at IIT Kharagpur and realised that entrepreneurship was my true calling. And my father was there to motivate me and offer help and guidance at every step along the way.”

Her first venture
Acharya’s foray into the world of business happened when she co-founded Ocimum Biosolutions in 2000 with the idea to offer world-class bioinformatics shrink-wrapped software. From 2000 to 2013, Acharya led Ocimum through three international acquisitions, two fundraisers and launch of innovative products, solutions and services via the proprietary platform called RaaS (Research as a Service). The new products were from various domains, including gene sequence analysis, microarray data analysis and gene optimisation. Over the years, Ocimum developed and customised a laboratory information management system (LIMS) called Biotracker™ for laboratories specialising in life sciences. The company also built gold-standard databases that formed the basis for genomics research and development in laboratories, in domains such as life sciences, health care, food technology, pharmaceuticals and cosmetics. Acharya reveals that these achievements helped Ocimum Biosolutions get the top 25 per cent of R&D laboratories across the globe as clients. 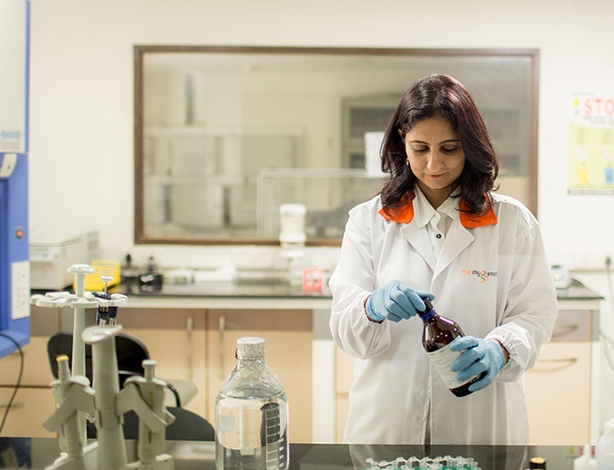 Anu Acharya during a lab audit

A new path
So how did Mapmygenome India come to be? Acharya replies, “By 2010, we had several years of expertise in genomics research behind us. This technology could be a potential game changer in health care, so we were keen to move to a direct-to-consumer model. We presented the idea to the board at Ocimum, but they vetoed it as they were apprehensive.” Undeterred, Acharya and her team decided to set up a new company called Mapmygenome India. Their expertise in automating genomic workflows helped, while the gold-standard genomic databases that they had developed at Ocimum served as the foundation for the new venture. The team also worked on customising Biotracker™ for Mapmygenome.

There were many hurdles along the way, including the paucity of India-specific data. Nevertheless, egged on by a desire to be a part of the ‘Make in India’ drive, the team persisted in building an India-specific data set. Another challenge was that personal genomics was a new concept in India, which meant that they had to create awareness even among health-care professionals.

While Ocimum is still run by its other co-founders, Acharya is no longer actively involved in the business, though she continues to be a shareholder. Today, Mapmygenome, boasting a team of 50, offers personalised health solutions based on genetic tests that analyse the DNA for variations at targeted loci, associated with specific health conditions. Apart from Genomepatri™, there are two other tests that the company offers currently. One is MyFitGene™ that predicts key attributes of cardiorespiratory fitness, muscle strength, body composition, dietary restrictions and psychological aspects to support individuals in achieving their fitness goals; and the other is MedicaMap™ that predicts an individual’s response and adverse reactions (if any) to 100+ drugs across multiple disease areas.

The company’s clients are mostly people who are looking for personalised health solutions through genomics. Mapmygenome also works with hospitals, health-care apps and fitness and nutrition service providers that use its products and services to customise their clients’ wellness plans, fitness and dietary regimens, etc. It also offers customised predictive analytics to health-care businesses.

People are realising that genomics can provide answers to many health-care problems of today and tomorrow. Therefore, the future for genomics is bright, especially in India 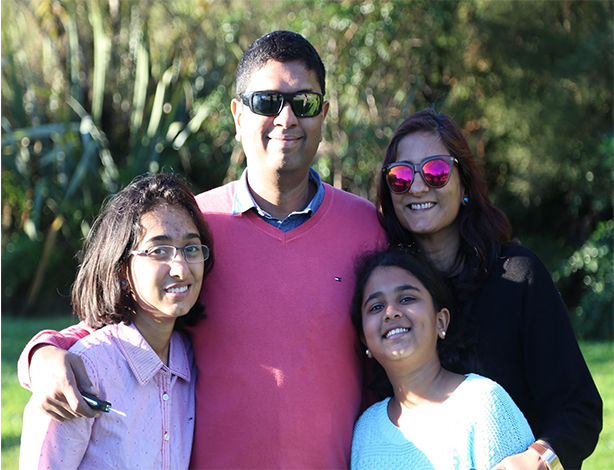 An illustrious journey
In her journey as an entrepreneur, Acharya has tasted much honour and glory. She made it to Red Herring’s list of ‘25 Tech Titans under 35’ in 2006. She has won several awards besides, including ‘Entrepreneur of the Year’ by BioSpectrum and Astia Life Science Innovators Award in 2008; FICCI FLO Women Achievers Award (in ‘Innovation through Technology’ category) in 2015; and ‘Iconic Innovative Trailblazer of the Decade’ by Women Economic Forum in 2016. Acharya was also recognised as a Young Global Leader by World Economic Forum for its class of 2011. Further, she has won the ‘Women Ahead’ honour and made it to the ‘Top 5 Innovators’ list at Jio Economic Times Startup Awards 2015. Recently, she received a trophy in the ‘Leaders’ category at Dx Leadership Awards 2019 also, organised by Express Healthcare.

Acharya is currently thinking of ways to innovate and process improvements in technology, services and communication so as to take Mapmygenome to greater heights—a goal made easier by the fact that people are increasingly becoming interested in getting a genetic test done. Acharya says, “People are realising that genomics can provide answers to many health-care problems of today and tomorrow. Therefore, the future for genomics is bright, especially in India.”