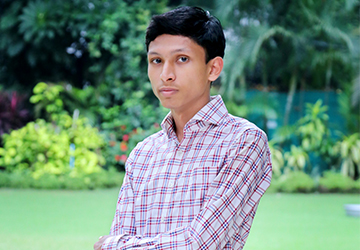 From fiddling with dice to entertain his family with magic tricks as a toddler to regaling large audiences solo, Aryaman Agarwal has left no stone unturned to perfect his craft every step of the way. This young magician has many tricks under his sleeve and definitely is one to look out for. 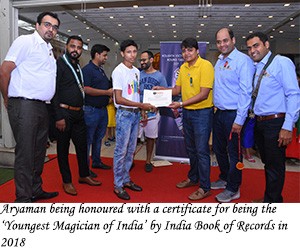 Aryaman Agarwal hails from a traditional Marwari family, who migrated from Odisha to Kolkata after Partition. Aryaman’s father, Saurabh Agarwal, runs a warehousing and construction business, and his mother, Gaurangi Agarwal, runs a wedding design company. Aryaman is just 17 now and is studying for his SAT, preparing to pursue electronic/mechatronic engineering. Sounds standard, right? Well, he also is the founder of Kolkata Youth Club, a skill-based philanthropy club for children, and apart from that, he loves to play the guitar, is a trainer photographer, an intermediate skier and has invented a solar tracker. Now, that makes him an exceptionally talented teenager, doesn’t it? Aryaman actually is all of these and much more!

Aryaman has been performing magic tricks under the guidance of master magician Prabir Kumar from the time he was just over a year old. He does not remember his first ever magic trick, but his mother says it had something to do with dice. It’s been a fruitful journey since, as becomes evident from the steady stream of accolades that have poured in more recently. His name finds mention in India Book of Records as the youngest magician in India (2018), he holds the ‘Youngest Magician in Asia’ record in the Asia Book of Records, 2018, and was awarded a gold medal by the Magic Authority of India in 2017. 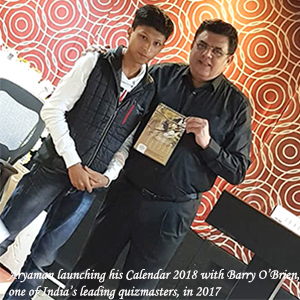 An agile mind and dexterous hand-eye coordination lie at the heart of Aryaman’s talent. Aryaman surprised his family with tricks and sleights of the hand as a wee toddler. Soon enough, he started performing solo shows, and then there was a moment of epiphany when magic transcended from being a hobby to his calling. Aryaman says, “My teacher, Prabir Kumar, encouraged me to perform at his show for a large audience when I was 8 years old. I got a standing ovation and many compliments, and at that moment I realised my passion was magic.”

Aryaman’s teenage years saw him gradually become an expert of conjuring tricks, semi-illusion, stage magic, sleight of hand and table magic. Talking about her son’s foray into magic, Aryaman’s mother, Gaurangi Agarwal says, “We cannot pinpoint a span of time when Aryaman realised his skill. Magic has been a normal everyday activity for him. His achievements – little or big, have always thrilled us. But more than us as parents, it is his dadu (Grandpa) who has always believed in him and celebrated him for the person who he is, and not for the trophies.”

Aryaman performs a lot of magic shows and impressive acts, but what is most impressive is how well his balances magic and his studies! Talking about it, Aryaman says, “I practiced magic for 10+ hours a week as a child, when there was no academic pressure. In the course of time, I realised that studies were very important too. Managing time, studies and magic, however, is my biggest challenge. Magic to me is relaxing. I love to learn new tricks.” At present, he manages both schoolwork and professional training under master magician Prabir Kumar, practicing for 3 hours a week. In all this, Aryaman credits his friends and family for being his unrelenting support system. “Despite magic being a very expensive hobby, my family encourages me by letting me follow my passion. My family and friends are super proud of me for being a record holder. I got a lot of appreciation and encouragement on social media as well.” 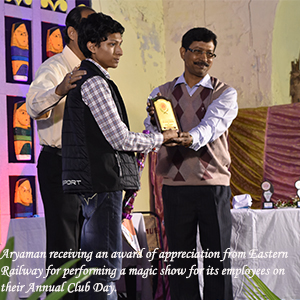 Not one to merely bask in past honours, Aryaman constantly hones and refines his skills. “Practice makes perfect,” he justifies. “With continuous stage shows, my stage fright has gone away. Magic has also taught me a lot about confidence, public speaking, how to convince people and to be alert.”

“Magic is about showmanship and putting people in a trance,” continues Aryaman in a moment of expansiveness. “While I’m my own inspiration, it is my teacher, Master Magician Prabir Das who has lovingly nurtured me. I also like P C Sorcar’s style of magic.”

Magic for a cause 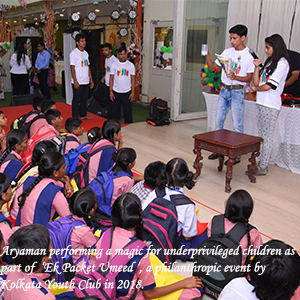 Aryaman takes his magic beyond the stage to create a better world, using his craft to champion causes that are close to his heart. “My brother Khushagra, cousins Avirath and Devyangana and I founded the Kolkata Youth Club in 2017. We organise many events for the underprivileged, where I show/teach magic and my brother plays the guitar,” he explains. “Further, the club is engaged in an ongoing drive to collect board games throughout the year.

Since its inception, it has also been organising an annual philanthropy programme in association with other NGOs. I love being a part of these events.” Sometimes, his mother helps out with managerial work so that he can focus on his studies. But given Aryaman’s determination, it’s easy to see that magic will always be a part of his life and that he will continue to do social work through it. And that makes it exciting to see what this young magician will conjure up next, considering that for his age, his achievements are quite remarkable.